even the garden frog is laughing

Sometimes things are just so absurd there is no making sense of it. This week in politics has absolutely blown my mind. The president of the United States makes these racist remarks and people support him? Women and people of color at his rally cheer for him and repeat that four Congress women should go back to the countries they came from? It's unfathomable. And it's personal. But it's kind of a washing machine kind of thing for me...so many emotions and thoughts and fears are churning around now that I can barely be articulate. 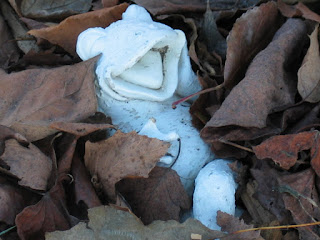 It's been a busy summer. Lots of gardening, watching babies grow and learn, coffee with friends, work at the Arts Center. Life is so good and so rich that it helps keep my head above the quicksand. Last night we had our monthly Third Thursday Potluck. We're on our third year, some have gone and some new faces have joined us and it's always so much fun and so much good food.

Yes, I colored my hair purple. It's an homage to Prince, my friend Kathryn, and Megan Rapinoe. And it's a flip of the bird to the White House. (I know that isn't rational.) My friends last night were very complimentary of my purple locks. It's only hair and it's temporary so what the hell. I should have brought the bottle of Purple Rain and done a couple streaks for those who were interested.

I'm inspired but I still don't get much done. I finally mailed a Christmas package to Jane in Iowa that arrived in time for the 4th of July. What the hell. Hahaha!