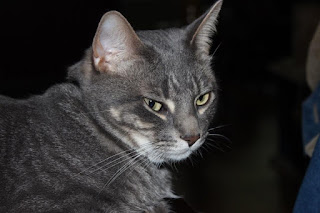 Fat Cat. I took Woodrow to the vet at 11:00 yesterday. He had a rabies shot but the focus of the visit was on his weight. The vet suggested a reduced calorie food as we’ve already cut back on treats, follow feeding guidelines, and he no longer gets tuna at noon. In spite of all this, he gained two pounds. I brought him home and left the low cal food on the counter. Regis came home a couple hours later to find a bag of caramels ripped open and strewn around the living room. What the.

Woody is a fussy eater. I doubt he ate any caramels. It was definitely an act of rebellion.

And it wasn't Gus because Gus never gets into things. If there is food on a table right in front of him, he might rest his nose within inches, but he won’t touch it.

They have been known to work together. We came home once to find an Egg McMuffin wrapper on the floor. Gus wouldn't take something off the counter and Woody wouldn't eat it so it was a mystery. We finally figured out that Woody knocked it to the floor and Gus ate it. Devious little pals.