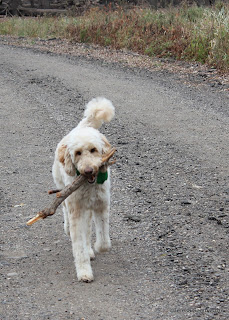 This is our big Golden Doodle, Gus. There is nothing he likes better than a walk in a place where he can be off the leash to run and chase sticks or his ball. He's good about sticking close to Regis and coming back when he's called.

Gus and Regis went for a walk by the hospital the other evening. It was getting dark and cool so Regis was surprised to see a gentleman standing out in a field, hands in pockets. Assuming he was a bird watcher, Regis was ready to move on...but not Gus. Gus ran out into the field and made a few circles around the man, ignoring Regis's calls to return. He sat down in front of the man and watched his face. Regis finally trudged out to see why Gus was ignoring him.

The man said he had gone out for a walk but was lost. He admitted to not knowing where he was and he couldn't name the place where he lived. Regis suggested that he and Gus would take him in the truck and find his home.

When they got to the truck, Regis named a few of the assisted living facilities in the neighborhood and the man recognized the name. Mystery solved. They drove him home and made sure he was safely inside.

This is not the first time Gus has rescued someone. Regis and I joke that he's like Lassie. Another time, same vicinity, Gus took off, refused to return. When we turned the corner, ready to scold him, he was with an elderly couple. The man had fallen to one knee and his wife, a tiny woman, didn't have the strength to help him stand. We got him up and walked them back to their residence.