waking up, waiting for war

It's been a little more than a week since we inaugurated the new potus. I am already weary of waking up every day and having my first thought be of war. Every day, it's some new outrageous thing he has done. Every day, some new embarrassment in front of the world.

Yesterday, people who have lived here legally for years were detained and not allowed to enter the US. Britain is considering (again) not allowing him to visit their country. He is an ignorant schoolyard bully. I say if they decide to let him in, they have to keep him. Preferably in a jail cell.

This morning, I wake up to see he has reshuffled the US National Security Council, downgrading the military chiefs of staff and giving a regular seat to his chief strategist Steve Bannon. The guy who tells the press to shut up. The guy who looks like Nick Nolte's last mug shot. 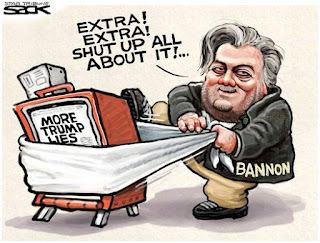 From Wikipedia: Bannon was a founding member of the board of Breitbart News, a far-right news, opinion and commentary website which, according to Philip Elliott and Zeke J. Miller of Time, has "pushed racist, sexist, xenophobic and anti-Semitic material into the vein of the alternative right".

You can't make this shit up, my friends. If you voted for this dude, this is what you got us. It's not like he kept his crazy hidden during the campaign.

I'm angry. Disturbed. Afraid. I'll go into my kitchen soon and bake a couple more loaves of bread. If they take away our social security and medicare and we end up living in a van down by the river, at least we'll have bread for a couple weeks.
Posted by Teresa Saum at 8:12:00 AM