snow and the surgeon general 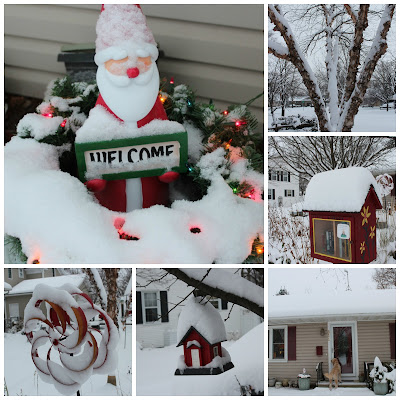 Gus and I were delighted with the snow we found this morning. I put on boots and mittens and went out to feed the birds. As you can see, there is about ten inches of fluffy stuff piled vertically on everything. I wanted to take some pictures before the sun and the wind had a chance to disturb it. It's peaceful and bright out there this morning!

Regis and I were both awake in the middle of the night. Forces in the universe my doctor used to say. We intended to go to a movie this afternoon but I think we'll pass, considering the snow and our sleep disturbances.

I spent some time poking around the Surgeon General's report on addiction this morning. It's very interesting but very long, almost 500 pages. I considered printing it so I could highlight and file it in a binder (because that's what I do) but I didn't. I thought the key findings [https://addiction.surgeongeneral.gov/key-findings] were more informative than the summary if you aren't inclined to read the whole thing. I would recommend reading at least some of it. Most people have information about addiction that's almost a hundred years old and it doesn't hurt to be updated now and then, my friends. In fashion and in information.

I wonder who agent orange has appointed to be the surgeon general. Sarah Palin? I saw a funny meme on Facebook (which I am still mostly boycotting) about her but I can't find it now. Maybe it was a tweet. I don't do that either. I am busily eliminating social media from my life. As Emily says, we are devolving.