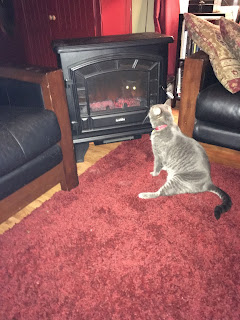 I'm tucked up in my chair, flannel head to toe, warm socks, blanket. Electric fireplace is sending out a nice glow and a bunch of BTUs. My coffee is hot and the tree lights are on. I can hear Regis rummaging around in the other room, getting ready for a walk. In the dark. I think I will pass. Actually, I don't think the wild horses have been invented that could drag me out there this morning.

Woodrow just made his first ascent of the Christmas tree. I think he was trying to make it to the windowsill because he made a turn halfway up and landed there. He doesn't like his world disturbed, I will say that, but we moved his favorite red chair yesterday and he has adjusted. He took a nap in it last night while we watched Star Trek.

I started a paragraph about things that irritate me this morning, but I deleted it. Here is my gratitude list instead.

The picture at the top is one I took of Woodrow last night with my phone. Somehow, it turned into a little video. The magic of Apple, I suppose. The fire moves and Woody's eyes appear. It's creepy.

I had Regis drag the tree out of the basement yesterday and I went to the store to buy some more lights because that's easier than trying to find and untangle the ones I bought last year. Eventually, I will find them and probably hang those on the tree, too. A guy can't have too many lights this time of year.