bad week for rodents we know 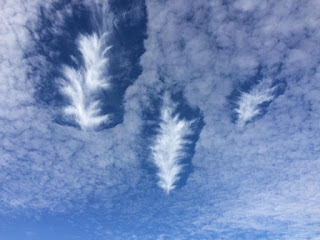 The other day I was tidying up on the patio. I found a garbage can filled with water and when I started to dump the water out, a fluffy tail floated to the top. Uh oh. I abandoned that task and reported to the dead rodent manager in our family. He investigated further and discovered a squirrel must have dropped in there and been unable to escape. I know squirrels are rodents, but it made me sad to think of the poor thing scrambling to get out of there.

This morning on our walk, we saw these beautiful cloud formations. I think they are called mare's tail clouds but none of the pictures I found on google were quite this nice. I love the frames around them.

As we passed one of the buildings on the edge of town, Gus got interested in a rat poison thing. We hollered to get him to leave it alone but he sure was curious. As we got closer, we saw a poor rodent (maybe a gopher but I don't want to start that controversy again) was stuck in it up to his shoulders. He had probably been eating the poison pellets so to liberate him would have done no good.  Damn. A very bad week for rodents we know.

We're having a very nice Sunday. Tom and Betty are coming for dinner. I made Cuban bread, we have ribs on the grill, and new red potatoes ready to roast in the oven. Happy October!