it's been a weird ass day 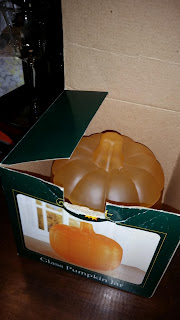 I went to work out with Gunnar at 7 instead of 8. Holy crap, the guy tries to kill me and I like it.

I went to work at Lone Star at 11. A guy about 55 walks in with his wife. They have seen the billboard on their way from Mpls to Fairmont. He looks and sounds so familiar. I finally go back and ask if he is a P_____ from Fairmont. Yes, he is. Stunned. His sister and I were on the same dorm floor in 1970 and later shared an apartment. I knew his parents, his siblings, and probably even him although he was young at the time. Wow. Small world.

Regis and I went to Mankato. I stopped in a funky little craft shop that's been there for many years. Dusty, Neglected. We both had the feeling we had to buy something because it looked like she hadn't made a sale in a long time. He held up a couple things. We finally settled on this. An orange pumpkin.

We had dinner at one of our favorite pizza places. Yum pizza and wine and desserts if you have any room left. Talked to a lovely young woman who signed us up for birthday notifications for all the grandchildren. So...if you get a card in the mail, don't be mf'ing us. Wahaha!!!

So that's all my connections for today. Carry on.
Posted by Teresa Saum at 5:42:00 PM