landscapes of the heart

This is what the sun looked like this morning about 7:30. We've had some very hazy sunshine the past week and I hear it's because of the fires in Canada. 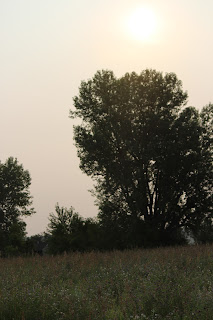 Regis takes at least two walks a day but often doesn't take the camera because he is occupied with Gus. So, if I don't go along, I miss out on some great shots. Yesterday, the mist and fog bubbled over the valley. It's the thick white layer between the tops of the trees and the ridge in the distance. 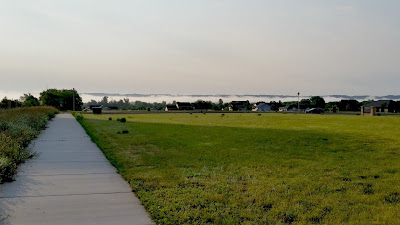 This is the sunset from last night. Photo taken with the phone but still beautiful. 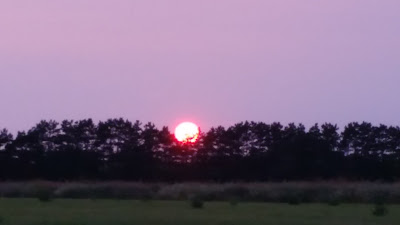 We had an interesting experience last night. Regis met an old fellow on the bus a few days ago. His name is David and he turned 89 today. Three weeks ago, he had a car accident (when he entered a round-about for the first time) and fractured his arm and totaled his car. He couldn't find a way to get his belongings out of the wrecked car at the body shop so Regis volunteered. When he found out it was David's birthday, he invited him to have dinner with us and what a delightful guest he was. He has an amazing memory and told stories about meeting his wife 50 years ago, enlisting in the army and serving in the Korean War, and learning to drive on the gravel roads of South Dakota. He is quite a character. 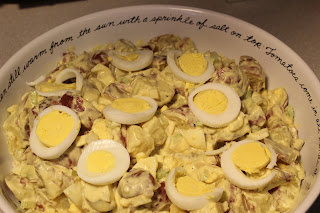 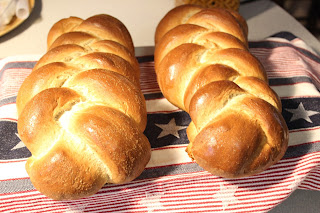 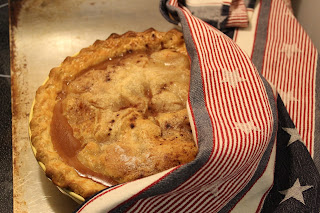 This is my 4th of July cooking: homemade potato salad, Challah bread, and apple pie. I let the crust on the right side get a little dark so I hid it with a holiday towel. Ha!

Here's a throw-back photo...Zoey watching the fireworks a couple years ago. Celebrate the 4th by seeing the world through the eyes of a child. And be safe. 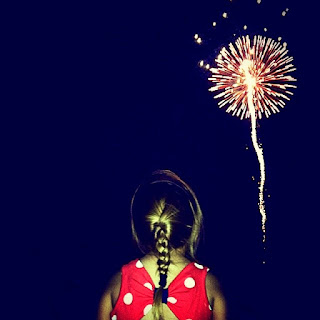