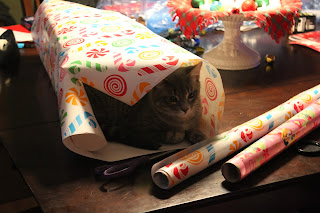 Yeah, not so much. He is highly attracted to any kind of rustling paper or bag. He is driven to investigate. I think store-bought cat toys are over-rated. He pays about zero attention to them. He likes feathers, paper clips, dried leaves, and paper. And boxes. He loves boxes. He will also jump right into the laundry hamper when Regis brings it up filled with clothes right out the dryer. 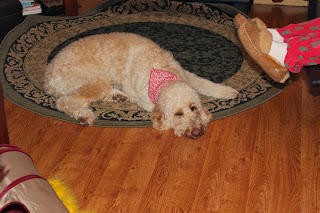 Gus and Regis, however, were not the least bit interested in the present wrapping.Not like it was a big production. I wrapped four things. 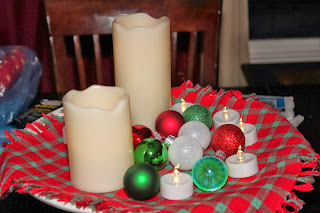 That green thing in the front, not the shiny one, is a cat toy. I have no doubt that Woodrow dropped it there. This morning, he brought Gus's food cup into the bed. I think it was an offering to Regis...bringing something valuable to the lair.

I made the coolest oatmeal for my lunch today. I put a half cup of rolled oats in a pint jar, added about 3/4 cup of milk, a tiny bit of brown sugar, pecans and dried cranberries, a teaspoon of cinnamon and after shaking it well, I put it in the refrigerator overnight. It's delicious! So easy and no cooking! I am not the genius who invented this...it was in the Trib yesterday. They suggested making a week's worth at a time. I only had one pint jar so I didn't do that...but I might in the future.

Have to publish and sign off...almost out of battery!