It takes a while to recover from the stimulation of being in a room with six people for 15 hours. We only had 58 voters at our polling place so we weren't exactly over-whelmed that way but still...constant chatter and activity. 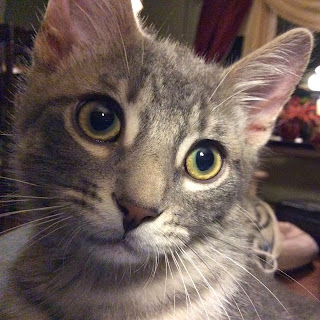 Our little kitten, Woodrow, went to the vet today to have his front claws removed and to be neutered. He looks so innocent it was hard to leave him there. He left another bloody trail from his claws this morning, though, so we'll be glad when it's over.

They just called and Woodrow is out of surgery and in recovery. He will be ready to come home tomorrow morning.

This morning I had to clean, scrupulously, his litter box. For a four-pound kitten, he sure poops a lot. We have to use a different kind of litter for a while so his little paws don't hurt. Poor baby. 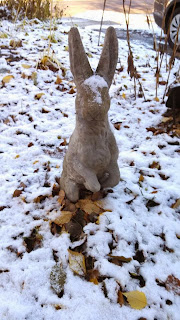 Here is the bunny this morning with his first coating of snow. He has Facebook fans in New Orleans who keep tabs on him in the winter.

I'm kind of feeling a nap coming on today. Regis is away working on AARP tax stuff so I might just take advantage of the quiet house.
Posted by Teresa Saum at 11:11:00 AM