are we taking the soul out of peppers? 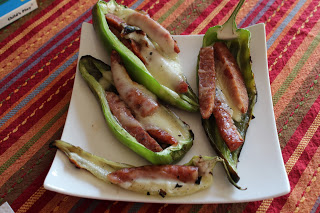 Regis and I have been experimenting with peppers on the grill for a couple years. We started with a recipe for stuffed jalapenos and have gotten more experimental as time goes by. For one thing, it was a bear getting the seeds out of jalapenos and then figuring out a satisfactory way to keep them upright during grilling.

We discovered poblano peppers and started to slice them open and lay the stuff inside. That worked so we tried it with Annaheim peppers and banana peppers.

Taking the seeds out is the tricky part. If you leave too many, they taste like fire. If there aren't enough, they don't have much flavor. Regis said we might be taking the soul out of them by being so meticulous in the cleaning.