going back to bed

I've been up for about an hour but I think I have decided to go back to bed. It's cold and gloomy outside again. Yesterday the temperature got up to 60 for about five minutes. By the time Regis and I made our way to the Lone Star for bbq, it was cold and rainy. Spring is coming reluctantly this year.

We had such a nice, ordinary Saturday. We took a drive to pick up a few things at Walgreen's and stopped at the dog park. (I sat on the bench for a while but that many dogs is over-stimulating for me so I went to the car. Ha.) We went for a late lunch, I took a nap, and Ella and Alex came over to make spaghetti monsters and rice krispie eggs.

Going back to bed for a while was a good choice.

I'm not dressed yet and it's almost noon. What happened to that energy?

I got busy and ordered a bunch of new pictures for the family photo wall. I realized the pictures up there were all two years old. I love looking back through pictures. It makes me realize, again, how much fun we have.

I tried to use a Walgreen's coupon to order pictures from Snapfish. That didn't work but the customer service agent at Snapfish was very patient with me and my brain dysfunction. 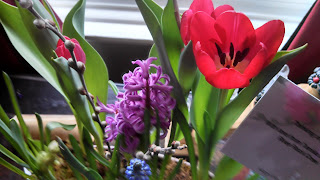 My bulb garden is blooming! It came from my friends at River Rock via Mary's Flowers. It's beautiful and springy!

On to a busy Sunday. We're going to hear some music later this afternoon and then to Tom and Betty's for dinner. It's been a very nice weekend.
Posted by Teresa Saum at 12:01:00 PM