Just want to let everyone know that I made it to the store in fine shape. Actually, it was good that I went so I could spot the things I have been craving but didn't remember until I saw them. Cinnamon Bunny Grahams. Dark chocolate covered almonds. Pears.

I only had to dodge two people. Maybe I am becoming reclusive. I appreciate the concern of people, really, I do. I don't know why I have this aversion. It's just a quirk.

I'm planning my next nap already. I think I must have slept more than I thought last night. I swear I heard the clock chime every hour until 4. Bummer.

I see I am the master of short and choppy sentences today. Choppy grounders, my friend Mike used to say. I think he was referring to baseball, though, rather than writing.

I just read that it's Pi Day. 3-14. A day to appreciate mathematics. Now I see that this is a day celebrated around the world. How did I not know? It's like the time I saw on the cover of the Rolling Stone that Radiohead is the future of music and I had never heard of them (or it). 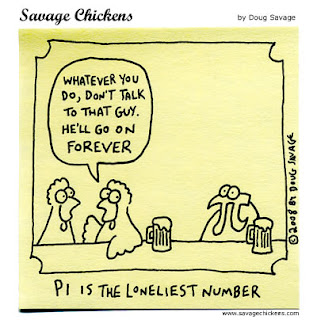 Happy Pi Day! Celebrate by adding something!
Posted by Teresa Saum at 12:19:00 PM

Sometimes I have been known to circumvent an entire store to avoid a conversation! There are times I just don't want to talk. Quirky? Yes, but who cares.