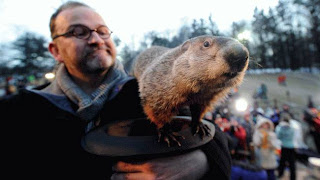 This is a holiday whose meaning escapes me. I think the story goes that if Phil sees his shadow, we'll have six more weeks of winter which they always make sound like a bad thing. Here, if winter ended mid-March, we'd all be picnicking in the park on St. Patrick's Day and that ain't bloody likely. Some years they have to cancel the parade due to snow storms.

The stuff they call news now is amazing. The other day while exercising, I watched the Today Show which I remember as having some real interviews and real news. Four people sat on a low wall and yucked about this and that as they watched a clip of the president and the secretary of state. The conversation was about their body language and if it indicated she would be on the presidential ticket in 2016. That's some heavy duty news.

And that football player with the made-up girlfriend. You can't walk by a tv without seeing a story about that. It's all very weird.

As expected, I slept the day away yesterday. I did get up and go to Walgreens with Regis and Gus, then out for a bite of lunch. Another nap ensued in the afternoon. I got up in time to order a pizza for Tiffany and Elliot. I meant to make a home-cooked meal but did not have the gumption.

My brother and his family are providing the daily can of whoop ass today. They're meeting up in Mankato and joining us for lunch at the winery. Four cheese pizza, nice glass of wine, fireplace, good company. That's all good for the soul. That's the kind of stuff they should put on the news.
Posted by Teresa Saum at 6:26:00 AM