I have no idea what this means. It's the title from a post I started a few weeks ago but never went beyond the title. So, happy Friday...gourds for change.

Today has been a week of ...not sure how to say it. Just when you think things are bleak and people are butt heads, you are renewed and the world is redeemed. That sounds a lot more serious than the whole thing was but it was a good feeling anyway. A series of small things can beat you up just as fast as a big thing.

Gus is restless this morning. He likes it when Regis and I are both up and he's nervous if one person is still in bed. He keeps running into the bedroom and leaping on the bed. He lies flat and looks at me without moving, as if I would miss his huge dog self on the bed. Then I see his tail wag a little. Regis says I can leave him there but if I do, he just follows me out, then goes back in two minutes later.

I finally bring him out and close the door. Now he's pacing and whining.

We have no plans for the weekend except to finish up the home improvement projects we started in September. I have some painting to do with an old-base paint which I loathe. I have curtains yet to wash and re-hang. Ugh. This gets old fast, this redecorating.

I'm working out with Rachel again this morning to make up for the day we missed last week when she had bronchitis. I have a busy Friday at work and then we're going to meet some friends for a drink and a bite to eat. Sounds like a nice way to end the week. 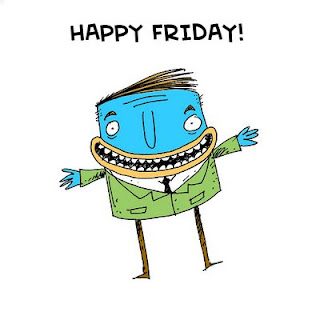