That's a fifty percent chance of partly sunny to partly cloudy. I heard a weatherman say that once.

I came home and did some weight lifting in my dining room. Fleetwood Mac on the stereo or whatever you call it these days. This is an iPod on a radio thing. It's not a boombox. Have you noticed that stereos got smaller and smaller and now they're getting bigger? Planned obsolescence.  What the hell is wikipedia anyway? Who writes that stuff?

It was cold today but bright and sunny. Regis and I have been drinking coffee like fiends this week, but sleeping well. I didn't even get up to exercise this morning.

A new Regis dream. I brought a puppy home and Regis knew it was really an alien instead of a cute pet. It's how aliens had infiltrated our world. Isn't this part of the plot of Men in Black?

Regis is studying for his tax test so I'm surprised he isn't having dreams about 1040 forms.

I'm too tired to make much sense tonight. 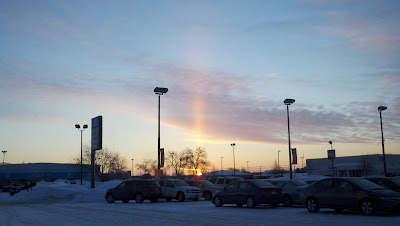 Gorgeous sunrise. Regis took this picture about 7 o'clock this morning while waiting for our damn Honda to get a check-up because it wouldn't start Sunday morning. This is a new car with a fully functioning battery. Once last year and once this year it wouldn't start in the morning. We have driven Toyotas for years and never had one that didn't start. We got a battery jump from a kind passer-by but Regis told the Honda folks that next time, we will have it towed. They pay for the tow so why should we bother to jump the battery and then drive it over there for them to tell us there isn't anything wrong? That's my rant for the day.
Posted by Teresa Saum at 7:17:00 PM