I asked the professors who teach the meaning of life to tell
me what is happiness.
And I went to famous executives who boss the work of
thousands of men.
They all shook their heads and gave me a smile as though
I was trying to fool with them
And then one Sunday afternoon I wandered out along
the Desplaines river
And I saw a crowd of Hungarians under the trees with
their women and children and a keg of beer and an
accordion. 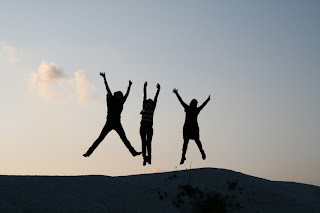 We had a little party last night and while we didn't have an accordion, we had some good music and a little keg of nut brown ale, thanks to Tom. It was a good time. Regis made two racks of ribs that got rave reviews. The only complaint is that there weren't enough of them.
It's very cold out this morning (windchill -26) and I can't quite get up the gumption to go work out at the Pulse. Maybe I'll use the treadmill in the basement later instead.
I hear Regis stirring.
He woke up earlier and told me he had a dream that he was traveling to Philadelphia and the security was tight on the airlines, of course. The last thing they did was ask him a security question: Who is your favorite Simpson? I'm not sure that would keep terrorists off airplanes, but you never know.
Posted by Teresa Saum at 7:27:00 AM