We've had a nice weekend, so far. I went to exercise yesterday, picked up Ella on my way home, we decorated the Christmas tree, went to Patrick's for lunch and watched the fish house parade. Our float concept would have been a hit so we're already planning for next year. 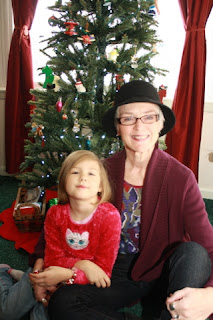 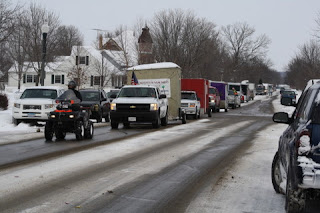 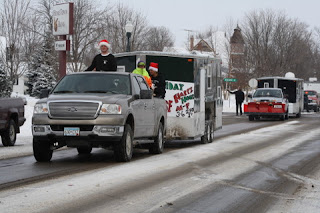 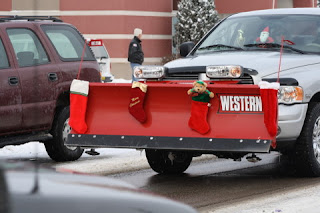 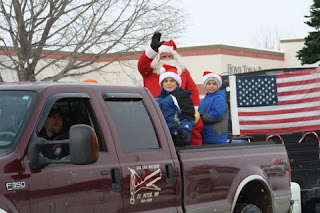 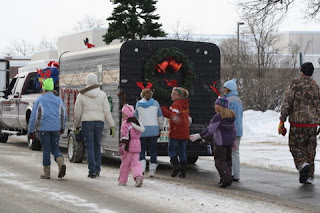 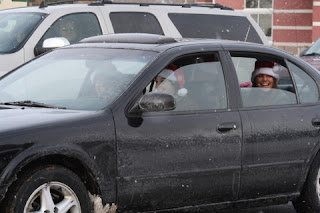 This last car was our favorite. The license plates are from South Dakota. Not sure if they meant to be in the parade or not but they were such good sports. They all wore Santa hats and the windows were rolled down so we could hear the Christmas music. Beyond this, there was not a lot of imagination or humor in the fish house parade.

Regis and I went out for a quiet dinner last night and ran into some old friends. We had a good time at Pappageorge with Ann and Brad, then stopped at Patrick's on our way home. The band, the New Primitives, is one of my favorites so pretty soon it was dancing time. Two young women who were not born in this country, Teresa and Christina (twins) were fairly inebriated and they decided I was their spiritual mother or something. The band was fun but we got out of there before the crowds came and I was kidnapped by the drunk girls.

They had an ugly sweater contest at the bar last night. There were lots of ugly Christmas sweaters but you were afraid to mention it in case it was just a sweater somebody wore.

The temperature is zero. Zero. What the hell. It's going to be a cold week, Miles, so keep your long johns handy.
Posted by Teresa Saum at 8:31:00 AM