I woke up at 2:30 and couldn't go back to sleep. I have a few cold symptoms so I'm worried that I did not, as I hoped, dodge the bullet of the illness Regis has been suffering from for four days. I'm going to spend the day activating my endorphins.

I checked weather underground this morning and the temperature is -6, forecast to be 9 degrees today. And they add: Much warmer than yesterday! It's a damn heat wave, I tell ya!

Vickie had a little party after school yesterday which would have been great fun except that we were all so nervous about getting into her house over the icy walks and so nervous about getting home on the treacherous roads that it might as well have been a drive-by party. Pull into the driveway, have a glass of wine in the car, and go home. The weather has not been conducive to Christmas parties.

Does anybody else feel like their skin is ready to flake off? Between the hand sanitizer, frequent hand washing, and the sub-zero temperatures, I'm not sure which is harder on a guy's skin. 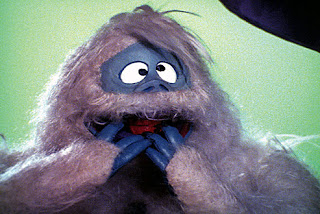 Regis and I watched the HD version of Rudolph the Red-Nosed Reindeer last night. I'm not sure HD is a good thing for an old movie with such horrible animation. The characters look like something you made in 5th grade with a scrap of fabric and some stuffing and the Burl Ives snowman has these awful beady eyes. Kind of creepy. It was better in black and white.