more things to be thankful for 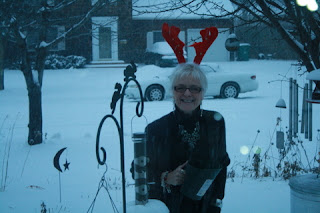 This thing is starting to mess with my formatting so I have to stop with the list. I don't like bad formatting...or spelling mistakes in public places.
Regis and I went to Patrick's last night for a glass of wine. They had posters up advertising a band called the New Primitives. Primitives was spelled like this: Primatives. Holy crap. I thought they would be stunned to know this so I took a couple of them down to show Brian who is in charge of things like that. He shrugged. I told Joey who was waiting on us. He shrugged. So, I guess in the world of Patrick's, it doesn't matter.
Onward and upward. Ella is coming over this morning to help decorate the tree. We will venture out to see the fish house parade and Santa later. It should be a wonderful weekend. Hope you enjoy it, too.
Posted by Teresa Saum at 7:46:00 AM