We spent the weekend in Canby where the wind blows relentlessly. We came back to St. Peter yesterday, sure that we would be protected in the river valley. No such luck. It was about 95 degrees with a blast furnace wind. All day. Ugly. We were going to make stuffed peppers on the grill but I'm not going out in that crap again. I made quesadillas on the griddle in the nice cool kitchen. 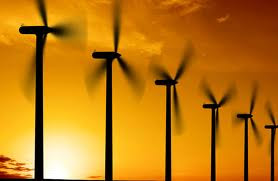 These are wind power generators in Africa. This is what it feels like here today. It makes us yearn for fall and baked potatoes and meat loaf and open windows and sweatshirts.

My friends tease me because I go to bed so early but I wake up at an ungodly hour most mornings. This morning it was just after 3 a.m. It's no wonder that I'm tired by 8 o'clock. I can't seem to change it either. Staying up later just means I get less sleep. I don't mean to give the impression that I am sleepless. I drift off nicely, I sleep deeply most nights, and I wake up early. Just the way it is.

It's a busy week with school starting and Regis wrapping up his internship. We don't have any evening plans until Friday when I run in the banana relay with a five-year old since my other team mates were called out of town for a family emergency. We should have three people for the relay but me and the five-year old will have to do it solo. It's not like I'm very competitive anyway.

That's enough rambling for one night.
Posted by Teresa Saum at 7:25:00 PM