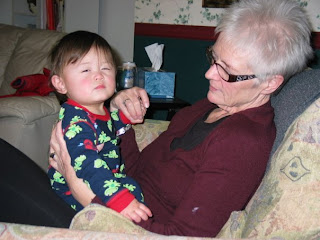 Elliot and Tiffany came for a visit on Sunday. Elliot, as you can see in the picture, has learned a new funny face. He squints his eyes like Clint Eastwood and it's hilarious. He's quite the little toddler.

We all had a fine time making French bread and lasagna. I had chosen a Tyler Florence recipe for something he called ultimate lasagna but we opted for a different one. Tyler's recipe had a lot of wine thickened with flour that didn't sound appetizing. It also called for four pounds of meat and two quarts of ricotta cheese. I think that would have flowed over the sides of the pan.

Regis and I are watching Julie and Julia. What a hoot of a movie.

I ordered a Kindle and it came in the mail today. Amazing. When I opened it up and started it, it said Teresa's Kindle at the top. I can access the Amazon store and buy a book and minutes later it appears on the home screen. Kind of a dangerous concept. My first book is the sequel to Dalva by Jim Harrison.

I keep getting distracted by the movie. Have to go.
Posted by Teresa Saum at 7:58:00 PM

It is a bit unnerving when you are greeted by name on a piece of electronic equipment, isn't it?