the confluence of a bunch of shit

Regis and I went to Patrick's for dinner. I was going to make spaghetti but it was a lomg day and I got new cowboy boots that were dyin' to be worn out and about. So Patrick's was wild...the confluence was the Twins game, the Nobel Conference, and trivia night. We had a hard time getting a table but it was grand fun. Lots of clapping and cheering. I think that was the Twins branch of the confluence. 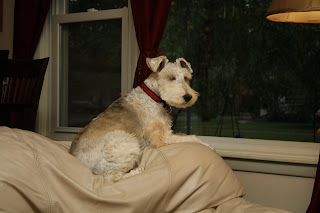 My new boots below. They're Ariat cowboy boots that I got from Sierra Trading Post for dirt cheap. 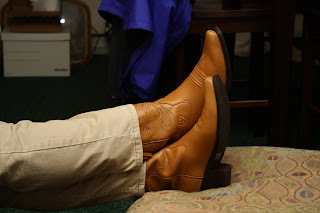 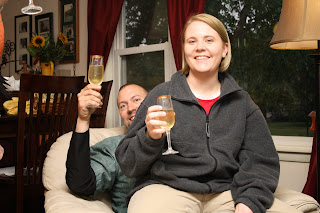 Reg and Amber are in the process of house buying. They made an offer on a house about two blocks away from here. The offer was accepted and today they had an inspector (Clouseau?) came to check it out. We had a glass of champagne to celebrate. They're in for a couple month's worth (maybe years) of hard work. I think they should have Thanksgiving at their house. Ha.

I cut down the canna lilies on Sunday. Later in the afternoon, I saw a hummingbird hovering over the place where the cannas were. He looked confused and disgruntled. I was in despair. How sad. Poor thing looked and looked, landed on the bird feeder, hovered again, then flew off presumably to Mexico.
Posted by Teresa Saum at 7:14:00 PM

You're becoming a cowgirl, if I'm not mistaken.

I can hear Nancy Sinatra singing......one of these days these boots are gonna walk all over you.......boots, start walkin!