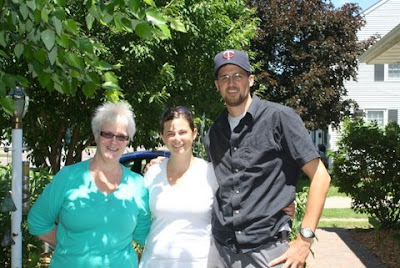 Johann, former neighbor and son of my former teaching partner, Peter, came by to visit today with his girlfriend Georgia. We miss his family down the street and it was very good to see him. 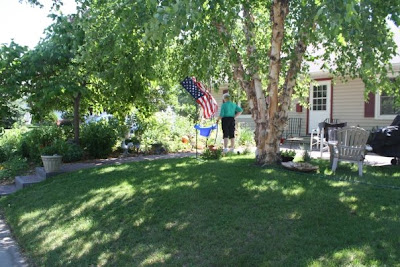 I have lots of pictures of the garden but we're over at Bob and Em's keeping care of Alex (as Ella said) while the rest of the family attends a Moondogs game. So I'll have to post the garden pictures later. Wait. They're on my facebook page. Ah, it's too much technology to keep track of in my muddled brain. I just added the last three words to that sentence to avoid ending it with a preposition.

Our garden is beautiful this year, in its usual random way. I moved some perennials today...a hosta here, a cone flower there. Some things end up in the back and get no attention. I have an astilbe that rarely gets watered and has only managed to hang on for dear life the past few years. I'm going to move it into a more prominent spot tomorrow.

The cannoli count is now 40! They pop through the ground and grow several inches a day. It looks like our tobacco crop.

I made the menu and grocery list for the week. That's a job with two holidays (4th of July and Regis' birthday) and a dinner for Bob and Em. I've been encouraging Peter to eat at home more as part of an austerity program and we like to fire up the grill in the afternoon so it's more like fun than work.

I'm going to play with Sir Alex His Babiness. Regis brought the camera but forgot the card so we won't have evidence of this part of Sunday.

Hey, that cat video in the Youtube segment below is a hoot.
Posted by Teresa Saum at 6:38:00 PM