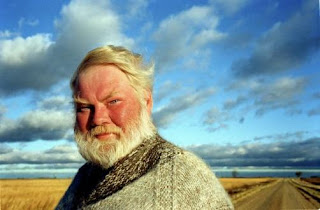 Picture worth a thousand words

I did not know Mr. Holm, nor have I read any of his works (I will now), however, the photograph of him is one of the most wonderful photos … read more I have ever seen!

Bill Holm, a larger-than-life author from Minneota, Minn., died Wednesday at a hospital in Sioux Falls.

The Rehkamp-Horvath funeral home in Marshall announced his death this morning.

Holm, 65, divided his time between his birthplace of Minneota and Iceland, the country of his forebears, was a longtime English professor at Southwest Minnesota State University and the author of several books of poems and essays.

Last May, he was named the 2008 McKnight Distinguished Artist of the Year, an honor that carried a $50,000 stipend.

"My boxelder bugs have odd preferences," he wrote in "Boxelder Bug Variations" (1985), one of his best-known works. "They love radio dials, phonograph speakers, amplifiers, pianos, and harpsichords. Some would argue that this is because of the warmth and vibrations, but I prefer to think it is because of their taste for Bach and Vivaldi."

When he received the McKnight award, Emilie Buchwald, his longtime publisher at Milkweed, called him "an American original, in the tradition of Walt Whitman."

She continued: "He is not just cross or cranky; he is stirred to the bottom of his soul by what he feels is evil ... He celebrates our potential to wake up, to not be torpid."