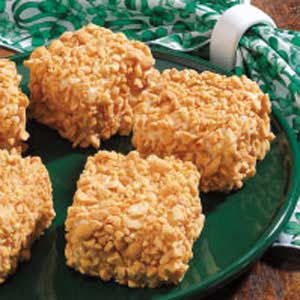 We went to a Christmas party where these little delicacies were served. Homemade, no less, and they were delicious. I remember them from the bakery of my youth and they were called mocha cakes. That doesn't really make sense because they're made of white cake, white frosting, and peanuts. My cousin, Deb, remembers the same thing. Anybody else have a memory of these and what they were called? In the recipe Deb found, they're called Blarney Stones.

Playing around with another widget:

Maybe they are from the island of Mocha, which is just off the shores of Italy in the Mediterranean. OK, I just made that up and wanted to come clean before you went on a wild goose chase on Google.

You're not getting much help with the mocha cakes question, although Paul, as an experienced BBQ chef, at least has something to add.

My grandma used to make mocha cakes, but I never was much for eating them when she had other really good cookies and sweets around that I liked better. I have a recipe for Blarney Cakes that fits the description. I don't get why they're called "mocha", either. Mocha cakes always seemed kind of like tea-party fare, and I've never been a fan of tea, either.