it just keeps getting better

I should have noted in the post below that the picture is an actual image of the cranium of Regis. That's no google image, folks.

Later this afternoon, I went to the drug store to pick up our prescriptions. When I came home, I pulled our garbage can up to the house and then went to get Bill's. As Bill was leaving for Dubai the other day, I offered to make sure their garbage was at the curb today so they didn't have Christmas garbage sitting there until June. This next part falls into the category of no good deed goes unpunished.

Remember I fell down once already today. So as I'm approaching Bill's garbage can from the north, all of a sudden I am on my ass on the sidewalk again. I just lay there and cried because I couldn't believe I had fallen down again for god's sake. Regis came storming out of the house yelling at me to get in the house what the hell was I thinking being out on the ice again he only had TIA his balance is fine and he'll take care of Bill's garbage can. Whoop. He's on his ass on the ice. Bob came out of the house (not storming or swearing) and told me very nicely to get in the house, then helped his dad to his feet. He said we should stay indoors until it warms up which might be spring.

There doesn't seem to be any lingering effects from the falling down except for sore muscles and some residual stiffness. I got a haircut tonight and I had to keep shifting from side to side. We stopped at the farm supply store and bought a stock of grit for the walks and driveway. 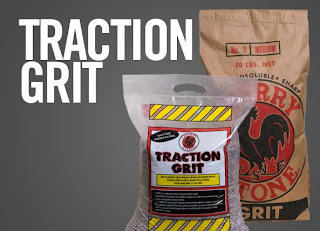