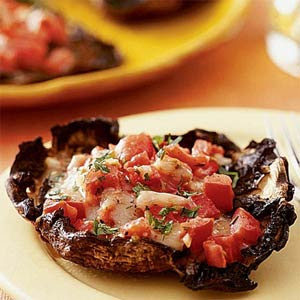 The stuffed mushrooms were delicious and so were the brats. We ordered Cooks Illustrated magazine and Regis found a recipe in the last one for brats cooked over caramelized onions. We used turkey brats instead and they were delicious. The onions were brown and tender and sweet and the brats were moist rather than dried out as usual. Here's the recipe:

Grilled Stuffed Portobello Mushrooms
Since the garlic isn't really cooked, the mushrooms have a strong garlic flavor. Grill the mushrooms stem sides down first, so that when they're turned they'll be in the right position to be filled.

Remove brown gills from the undersides of mushroom caps using a spoon, and discard gills. Remove stems; discard. Combine 1/2 teaspoon oil, juice, and soy sauce in a small bowl; brush over both sides of mushroom caps. Place the mushroom caps, stem sides down, on grill rack coated with cooking spray, and grill for 5 minutes on each side or until soft.

Spoon half the tomato mixture into each mushroom cap. Cover and grill 3 minutes or until cheese is melted. Sprinkle with parsley.

I used green onion in the tomato mixture and thyme instead of rosemary and I added a chopped yellow pepper. I think you could be creative with the vegetables and herbs as long as you don't get too much. The mushrooms don't stay in their little cup shapes on the grill...they kind of flatten out so don't put too much on them or it falls off.
Posted by Teresa Saum at 7:12:00 PM

Got any leftovers? I may sneak into your house tonight and check your refrigerator. The mushrooms sound fantastic.